Release 0.3 of Enigma is available as source from GitLab. You can download it from https://gitlab.com/jkampherbeek/enigma.git . The current version handles the calculation of the most important celestial objects and of Placidus houses. Much more to do, but it is a start.

I did not implement the tests based on fakes as I described in my previous post. It added too much boilerplate code. But I do need a decent test coverage. Possibly I will use integration tests for the more complex objects. In the current version, you already find 70 unit tests for the more basic tests. A first version of the technical documentation is available for download

Release 0.2 is finished and I started working on release 0.3. I will push the resulting code to GitLab so it will be available to anyone interested.
Release 0.3 will focus on refactoring the current application. Part of the refactoring will be the use of interfaces. Not the interface-parts of the units but interfaces for the objects. These interfaces will help in making the objects more loosely-coupled but also be a great help in automatically testing the code.
Free Pascal supports unit testing but it does not support mocking objects. There is a mock-tool but it is pretty old and not supported anymore. As an alternative, I will use Fake objects; in short, ‘Fakes’. A Fake implements the same interface as the original object but gives hardcoded answers instead of the real thing. If you write a unit test for an object that uses the results from another object, which again will have its own dependencies, you might end up testing a whole range of objects instead of the single object. That is where Fakes come in. They replace the objects that are not tested in the current unit test and make it possible to test just one class per unit test.

After I finished the code of release 0.3 you will be able to check the code, including the Fakes, yourself.

Shortly after I started working on Enigma using Free Pascal, a free version of Delphi came available. Embarcadero introduced a community edition of Delphi. You can use this edition if your yearly profit does not exceed $ 5000. For the Engima project that is an easy condition as there will be no profit whatsoever. The community edition is a welcome addition to the paid version that will cost you several thousands of dollars.
It is a nice opportunity but I decided to stick to Free Pascal. Why? I do not believe the official Delphi version has essential advantages compared to Free Pascal. The only advantage I can see is Firemonkey, visual components for Android, that are currently not available in Free Pascal. But as I will focus on a Windows version, for now, this is not an important advantage. Free Pascal, however, does have advantages compared to Delphi, mainly its support for Linux. And more importantly: you can rest assured that Free Pascal will be available for some time and will remain free. There is no guarantee that Embarcadero will continue the community edition forever. I still remember the end days of Borland, when a free version of Delphi was discontinued.
So I will place my bets on Fee Pascal and Lazarus.

Today I started a Facebook group about Enigma. You can subscribe at https://www.facebook.com/groups/246475509388734/
I will mention all new items on this blog at this Facebook group. 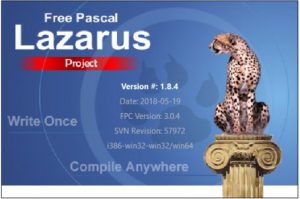